Charted Territory Uncharted Fans Poised and Ready for the Next Adventure

With the release today of Uncharted 2: Among Thieves, PS3 fans are getting their hands on the second iteration of the highly acclaimed series of adventure games from developer Naughty Dog Software. Key data from Nielsen’s Video Game Tracking and BuzzMetrics services indicate that awareness, purchase intent and online chatter for Uncharted 2 are all higher compared to the release of the original title Uncharted: Drake’s Fortune.

An examination of data from Nielsen’s weekly Video Game Tracking service finds that Uncharted 2 garners more robust numbers throughout the measurement periods listed across metrics such as aided awareness, Pre-Order/Buy First Week and Definite and Definite/Probable Purchase Interest compared to the original Uncharted. The data table compares both titles across the aforementioned metrics at different points prior to their respective release dates*.

Comparison of Awareness and Purchase Interest

The sequel enjoys more than double the aided awareness of its predecessor across all points in the comparison period, with more than 40 percent of all PS3 gamers interviewed one week prior to the release of Uncharted 2 recognizing the title, compared to 17 percent for the original game same during the same time period.

The proportion of PS3 gamers who indicated high purchase urgency for Uncharted 2 – those who would pre-order the game or buy it during its first week of release – is three times higher for Uncharted 2 one week prior to its release than for the original title (9% vs. 3%., respectively).

Comparison of Sources of Awareness

Online reviews/previews are the single greatest source of awareness for both Uncharted 2 and the original game among PS3 gamers one week prior to retail release. However, such reviews/previews are substantially higher for Uncharted 2, with 42 percent of PS3 gamers who are aware of the game noting that they have seen such online articles compared to 29 percent for the original Uncharted.

Examining the three months leading up to their respective release dates, online chatter for Uncharted 2 was consistently higher than for the original game. Approximately four weeks before the launch of Uncharted 2, a spike in buzz occurred around the time the demo was released on PlayStation Network, indicating potential heightened awareness of the game within the online PlayStation community.

BuzzMetrics Comparison of Uncharted 2 with the original Uncharted 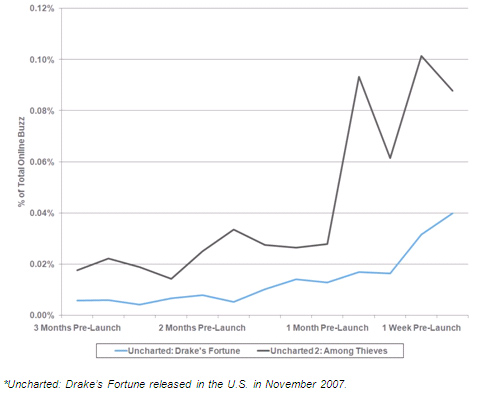