If there’s one thing that’s clear when we look at online behavior across consumer groups—men and women from teens to Boomers—is that every demographic is different. This makes it more difficult to reach some consumers than others. It also makes perfect ad campaign delivery an ongoing challenge for marketers. 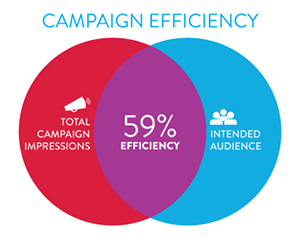 Overall, according to a recent analysis of Nielsen Online Campaign Ratings data, 59 percent of ad impressions served across all consumer segments reach their intended audience—down from 69 percent in 2013. This dip correlates with a shift toward narrower, more focused campaign audiences from broader demographic segments.

Demographic zones 1 and 2, which are broader and generally achieve higher on-target percentages (rates of total campaign impressions served to the intended audiences) than the others, represented 36 percent of site observations (each instance of a website or ad network appearing within a campaign) in 2014, down from 40 percent in 2013. The benchmark on-target percentages for campaigns with both broad and medium demographic segments (Zones 1-4) all experienced small declines. The most significant decline occurred among campaigns with the broadest audience segments: Zone 1 declined 6 percentage points to 84 percent, while campaigns with narrow intended audiences (Zones 5 and 6) performed consistently year over year.

Interestingly, the on-target percentage of campaigns aiming to reach females, regardless of age groups, declined over the past year; the biggest change was an 8 percent drop among females ages 35-64. 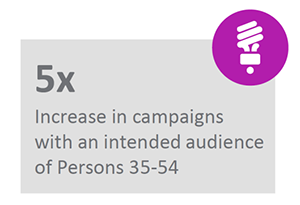 “In our most recent look at online ad campaign results, we see that campaigns are evolving to become more focused, and as a result, we’re seeing shifts in on-target percentages,” said Randall Beard, Global Head, Advertiser Solutions. “As the industry changes, so does the definition of success. We update these benchmarks around the dynamic media landscape so that media buyers can maximize return on investment by evaluating their partner and placement strategy throughout the campaign cycle, and consider how the changing environment might influence their strategy.”